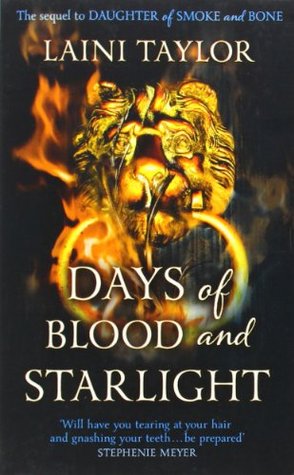 Once upon a time, an angel and a devil fell in love and dared to imagine a world free of bloodshed and war.

This is not that world.

Art student and monster’s apprentice Karou finally has the answers she has always sought. She knows who she is—and what she is. But with this knowledge comes another truth she would give anything to undo: She loved the enemy and he betrayed her, and a world suffered for it.

In this stunning sequel to the highly acclaimed Daughter of Smoke & Bone, Karou must decide how far she’ll go to avenge her people. Filled with heartbreak and beauty, secrets and impossible choices, Days of Blood & Starlight finds Karou and Akiva on opposing sides as an age-old war stirs back to life.

While Karou and her allies build a monstrous army in a land of dust and starlight, Akiva wages a different sort of battle: a battle for redemption. For hope.

But can any hope be salvaged from the ashes of their broken dream?

Read my review of Daughter of Smoke and Bone here.

What do I say about this book? It was good. It was amazing. It was emotional and funny and just as beautifully written as Daughter of Smoke and Bone. Goddamn it, Laini Taylor. This book is poetry. Every sentence is so wonderfully crafted and nothing feels forced to me. I mention this because I’m reading Shatter Me at the moment and the metaphors are killing me, they’re so forced and cheesy and a lot of the time don’t even mean anything. Ugh.

“Once upon a time, an angel and a devil held a wishbone between them.

And its snap split the world in two.”

See, that type of writing says something. It says something about the war and its effect. It’s visual and has an impact, you can hear the snap of the wishbone and the crackle of the earth when you read this. Or maybe that’s just me. But that’s why I love this writing so much.

Moving on from the writing style, this book is quite different from the first one. What’s changed between these two installments is that the focus is no longer on the romance, even though the core of the story is  still very much about love and hope, that hasn’t changed. The forbidden love is strong in this one, and if that is your thing then this is most definitely the series for you. However, now Karou and Akiva are separated and heartbroken, working on opposites sides of the war. And the war gets brutal.

In fact, the way this series is built up reminded me of Patrick Ness’ Chaos Walking. I’ve only read the first two in both series, but they’re similar in the sense that the first book is more narrowed in on one specific problem, as well as certain characters, then second book comes around and pans out, focusing on the larger war where the two main characters have been forced apart to the opposite sides.

This book is darker and more intense than the first. There’s more action, more plot, and more war-related horrors. And the twists in this book are still as amazing as they were in the first one, I love me some good plot twists. I absolutely loved the final section of the book.

The only reason this one gets half a star less than the first one is because it was a little bit slow in the beginning. We get a lot of new POVs in this book and it took a while to get into it. And I wasn’t always as interested in what Akiva and his siblings were getting up to, even if what they do is super important, I’m just more invested in the other characters. My favorite parts were definitely the parts in Marrakesh. I love Zuzana and Mik, they’re such relationship goals. Zuzana is just hilarious, her comment about Thiago: “Anyone who would wear all white like that clearly had issues” made me laugh. And I’m still emotional at the fact that a certain character appeared. ;_;

All in all, this series is fantastic. If you want good world-building and unique characters I couldn’t recommend this enough.

Have you read this book? Did you like it more or less than Daughter of Smoke and Bone? How does the last one compare?