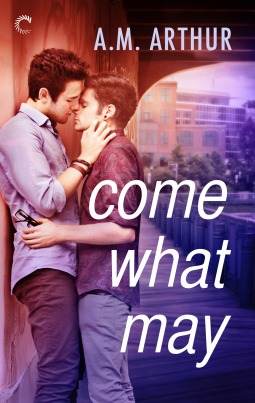 Jonas needs Tate. He just doesn’t know it yet.

Or at least, he doesn’t want to admit it. Because there is no way Jonas Ashcroft is gay. He’s a straight, carefree frat boy player, just like any good son of a conservative state senator. If only his struggle to convince everyone—especially himself—didn’t leave him so miserable. No matter how many girls or bottles he drowns himself in, Jonas can neither escape nor accept who he is.

Enter Tate. He’s smart, confident, and instantly sees right through Jonas’s surly exterior. Sure, he’s done things in life he’s not proud of, but he knows who he is and what he wants. And what he wants is Jonas. As their easy friendship intensifies into something more, Tate introduces Jonas to a life he’s never known. One filled with acceptance and sex and a love that terrifies and excites them both.

But some inner demons refuse to be shaken off so easily. When Jonas’s old life barges in, he faces a shattering choice, one that could destroy everything he and Tate have fought so hard for. Sometimes love just isn’t enough—and sometimes it’s exactly what you need.

I received a free copy by the publisher via NetGalley in exchange for an honest review.
The thing with New Adult, or at least my impression of New Adult, is that it’s not really anything new or exciting all that often. No new plots, new characters, or new relationships. To me, this is nothing different from what I read on AO3 every day and have been reading online every day for the last decade or so.
.

I mean it’s cute, and I’m glad it exists, but it doesn’t blow my socks off. I could get this exact story anywhere and I have, several times in the past. There’s nothing wrong with this formula, it clearly works, but when it comes to actual books I’m looking for other things. I probably won’t read much more NA unless  I find something that seems unique to me personally.
.
Anyway, that’s just my personal issue with NA plotlines. Let’s get to the actual story. We meet Tate, an out and proud guy who runs a LGBT homeless shelter, and the closeted rich kid Jonas who’s new in town and who has a homophobic and controlling father at home. Already I’ve read this hundred times before, but hey, that’s just me. Jonas is all “oh no I’m not gay” until suddenly he’s all “ok yes I am, let’s bang”. Fair enough. Would’ve liked to see a bit more denial, resistance, and tension (I really like slow burn), but alright.
.
What I did appreciate about this is that it’s quite a bit longer than the last NA book I read, which felt too short and rushed (though I really enjoyed one of the characters in that one, which is why I rated it higher, though it should probably be 3.5 in hindsight). There’s also a bit more drama outside of the actual relationship, which I enjoyed.
.
Come What May builds things up quite nicely, if still a bit too fast for my taste when it comes to how soon they developed feelings for each other. I wanted more tension and more personality for both the characters. I couldn’t really describe the characters very well except for the fact that Jonas looks like Matt Bomer and Tate would do anything for his family. That’s basically what I’m left with as far as characterization. I also wish we saw more of Tate’s siblings and the family dynamic there, it would have made this book a more wholesome experience for me.
.
I liked the scene at the club though, where they danced and made out in public for the first time because it’s safe space. Flashbacks to a certain OTP

ugh kill me
Anyway, I liked what came after and how Jonas experienced what it would be like to be an out gay man in a world that doesn’t always appreciate that. I felt warm and fuzzy feelings when he protected Tate and it was nice to see Tate in a vulnerable position. It made him feel more like a well-rounded person.
.
All in all, this isn’t a bad book, I’m just not sure it’s the genre for me. Which is a shame, because most m/m or f/f romances seem to be NA, and thus use this formula, and I really prefer those kinds of romances. I’ll keep an eye out for something that stands out and come back to you guys!

Anyone else have this problem with NA, especially those of you with a background in fanfiction? I have no problem with the same plots over and over when it’s characters I already know and love (give me all the soulmate AUs), but with new characters (i.e. actual published books) I don’t get as engaged because the characters end up feeling flat. Flat characters + plot I know inside out = nah. Anyone else?

2 thoughts on “My problem with New Adult: Come What May by A.M. Arthur [ARC REVIEW]”