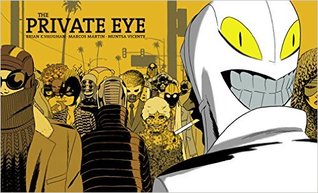 I received a free ebook copy from the publisher via Netgalley in exchange for an honest review.

This review was written for the Dystopia Reading Challenge.

The Private Eye is a series of ten issues that, as far as I understand it, were originally posted online but has now been published in hardback. It’s horizontal, I love that.

You might recognize the author as the author of Saga, which is a well known sci-fi graphic novel series. I’ve read the first four volumes of Saga and I love it a lot, so when I saw this on Netgalley I couldn’t resist. I ended up not loving it as much as Saga, but I really enjoyed it.

The story is a hardboiled detective story merged with a dystopian future in which everyone has a secret identity. This came about after “the cloud” burst 60 years ago and exposed everyone’s deepest and darkest secrets. So now there is no more internet, no more smart phones, and everyone uses masks and fake names to hide who they are.

“Look, nobody knows if it was an act of war or an act of God, but for forty days and forty nights, everything just poured right out for the whole damn country to see. Every message you thought was safe, every photo you thought you deleted, every mortifying little search you ever made… it was all there for anyone to use against you. People lost their jobs, families were torn apart, blah fucking blah.”

Our main character is P.I., an unlicensed private investigator, who suddenly gets a visit from a mysterious woman who has a case for him (in true hardboiled style). When his client winds up murdered, P.I. gets dragged into a dangerous conspiracy that threatens the newfound world-order.

Okay, so I loved the plot of this. It took me a little while to get into it, but when the ball started rolling I got sucked into it and finished it in one sitting. The premise is great, I love how current it is (in the sense of the theme of privacy and the internet) at the same time as it’s so incredibly wacky. They’ve really gone all out with the whole secret identity thing. No one’s going to know who you are dressed as a giant fish.

One of my favorite things about it was probably the characters, especially P.I.’s grandfather, who is basically from our generation. He’s slightly senile (or just deeply in denial) and keeps trying to get onto the internet and turn on his old iPhone, to no avail. I feel his pain. He’s also not a fan of the younger people’s obsession with anonymity. I love him because I’m always wondering what kind of things our generation will sit and grumble when we complain about “today’s youth” when we’re in our 80s.

I also liked Mel, P.I.’s assistant. She’s a young girl who can’t wait to be 18 so she can get rid of her charm bracelet (that shows she’s underage) and finally get a “nym” (fake name) and a mask.

Like Saga, this comic is wonderfully diverse, both racially and sexually. P.I. is a black man who’s previously been in a relationship with a man. Whether or not he’s gay or bi or whatever I’m not sure, but I was delighted to see that. This is coming to be one of my favorite things about Vaughan’s stories.

Also like Saga, this is in no way a “clean” graphic novel. There’s violence, blood, nudity (though not that much) and swearing. I don’t mind it at all, it adds to the grittiness of the story and makes it realistic by not shying away from anything.

I’ve seen a lot of people are iffy about the ending. I’m not sure how I feel about it yet, but I didn’t necessarily hate it. I think I kind of liked it.

I really recommend The Private Eye, it’s fast-paced, highly interesting, and the really colorful art captures your attention. If you don’t read too fast you’ll notice fun little things like the characters standing in front of Madonna’s memorial, which predicts she’ll die in 2017. Hm.