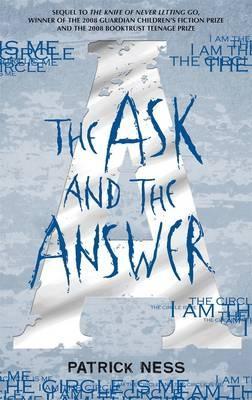 If you haven’t read The Knife of Never Letting Go then I don’t know what to tell you because there will be spoilers here. I don’t recommend reading this review if you have plans to read the first book but haven’t yet.

Let’s start with a brief summary.

The novel starts off directly after the first one and we find Todd imprisoned by Mayor Prentiss and Viola being healed by the women, led by Mistress Coyle, of  Haven. Todd and Viola are separated and desperate to find each other again, but they both fall victims to the manipulative forces of the two opposites sides in the civil war now breaking out on New World.

It is a novel about war and resistance, of bombings, terrorism, and genocide, and yet it is very much a psychological thriller compared to The Knife of Never Letting Go‘s action-packed cat-and-mouse adventure. I love me some psychological thrillers and dramas, but I found the first half of this book to be a bit slow at times, thus the slightly lower rating than the previous book. Don’t despair though, because shit went down in the second half and the first half did have some really interesting parts, namely Todd and Davy Prentiss’ work with the thousands of captive Spackle. I loved reading about that, it was awful and heart-wrenching but so interesting.

One of the really interesting things about this novel is how Ness approaches the topic of war. He makes sure both sides (Mayor Prentiss’ and Mistress Coyle’s) are realistic in the sense that no side is completely good. Both sides do terrible things, both sides get a lot of innocent people killed, and Todd and Viola both have to struggle with that, wondering whether or not the other has been a part of the horrible things the other side has done.

The novel is told from both Todd and Viola’s perspectives this time around and we are told when the POV changes so it’s no problem keeping up. Todd and Viola also have different fonts, which was a nice way to ensure you don’t forget who’s speaking since it uses first person.

The character development here is great too. Ness made the highly unlikable Davy Prentiss Jr. likable, so much so that towards the end he reminded me so much of my all-time favorite fictional character and that just punched me right in the gut. DON’T PLAY WITH MY EMOTIONS LIKE THAT.

And of course Ness ripped my heart out in the end once again, as if Manchee wasn’t enough. Goddamn it. I’m still not okay. If you’ve read it you probably know what I’m talking about.

Patrick Ness is so good. I don’t even know what it is exactly, but he’s so good. There’s something about this series that just comes to life in my head when I read it, I see everything. It’s like a movie and it’s beautiful. I’m usually good at visualizing what I’m reading but I don’t know, this just comes to life in a completely different way. I’m swear I can ever hear the background music when I’m reading.

Go read this series, it’s great. I don’t dare to think about what’s going to happen in Monsters of Men, which is no doubt going to be an even bigger war with probably two more opponents.

2 thoughts on “Review: The Ask and the Answer by Patrick Ness”